Finally, caught in the act! All this time, I’ve been detailing cheating by the Koreans and been called a racist and more for my observations. Even been taken to the woodshed by the head honcho. Well yesterday, it all became evident that I was spot on. Did you notice that Shi Hyun Ahn and Ilmi Chung were disqualified? The reason is that they both played the wrong ball on their final hole and not correcting the infraction before signing their cards, to put it mildly. 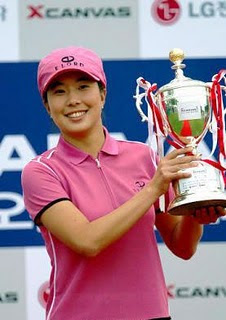 Here is what I’ve heard of the alleged incident. Both balls were in the fairway. Ahn missed the green and Ilmi hit hers on. Ahn chipped it close and tapped in for par. This is where it all begins. Apparently, Ahn noticed that this was not her ball and conversed in Korean with Ilmi. In the mean time, at least one caddie in the group noticed it also but did not say anything. They finished the hole, went to the scoring tent, checked the scores and signed their cards. Somewhere, either before or after going to the tent, Ahn told her caddie (a Nationwide looper and only working for her this week) “You did not see anything”. As of right now, I do not know who owned up and went to the officials. The third player in the group was oblivious to the situation and was not involved. BTW, Ahn shot 72 and Chung a 76.

Before I go any further I’ll give some background on Smich and the golfers he is accusing. He has been an LPGA caddy for over 30 years. In that time, he has had three winning bags. The last of which was with Mi Hyun Kim in 1999. Shortly after that win, Kim fired Smich.

Smich has worked for other South Korean players, but the last was over two years ago. He did work for Chung at some point in the middle of the last decade.

Anyone who reads Smich’s blog knows he doesn’t like the Korean players. Ryan at Waggle Room uses the word vendetta towards how Smich writes about players from South Korea. In 2007, Smich also accused LPGA player Young Kim of cheating. Most of the time Smich doesn’t name players when he makes cheating allegations.

At the 2009 LPGA Championship, a golf ball of Ahn’s struck and killed a bird. 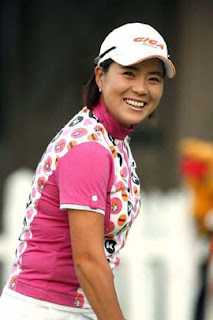 “The players sought out a rules official after their round to explain the situation and were subsequently disqualified.

“No one with the LPGA was privy to any discussions between the players and caddies in advance of the players’ efforts to seek out a rules official to explain the situation. We know only that the players came forward, admitted their issue and received the appropriate result based on the Rules of Golf.”

Bob Weeks, who is also blogging on the incident, went looking for Larry Smich at the tournament. Interestingly enough, Smich couldn’t be found. The golfer who he was caddying for, Stephanie Loudon, had her husband carrying her bag for the third round.

At the moment, the golf tournament is on television, and so far as I know, no mention has been made of the Ahn and Chung incident.

Deliberate cheating in professional golf is very serious and not unheard of. A Latin American player was suspended by the PGA Tour around 40 years ago. Jane Blalock was suspended for a year by the LPGA in 1972. That was till she filed a antitrust lawsuit. The accusations against Blalock was probably the sport’s biggest cheating scandal of the last 50 years. She was one of the tour’s stars at the time. What we have today involves two fairly obscure players. I don’t know if we’ll ever learn what did happen. The golf media rather write repetitive article after repetitive article on Tiger Woods than give the LPGA even five minutes of their time.

On a side note, Michelle Wie is leading the Canadian Open. Should she hold on to win, the LPGA attention deficit might decrease at least for one week.

Note- The first photo above is Ahn and the second is Chung.
Posted by The Florida Masochist at 6:24 PM