Well, kind of. You see, I'm scheduled to give a public lecture at the Japan-America Society of Fukuoka in precisely a month. As you can see from their list of officers, the JASF is made up of Fukuoka VIPs--the kind of audience a lowly English professor hardly ever gets a chance to address. And if the talk goes well, I get to do others on topics quite dear to my heart.

Unfortunately, the first talk is supposed to be the kind of horse-race-handicapping-meets-crystal-ball-political-forecasting deal that I have neither the expertise nor the inclination to deliver--how will the recent electoral victories for Democrats affect U.S. foreign policies in East Asia? I mean, I have some snappy opinions to trot out, but no considered judgments, at least by the end of the day when the draft is due to my translator. Did I mention that I'll be reading a sentence, pausing for the translation, then reading the next sentence? Yup. So on top of boring academic anxieties about stepping outside one's area of expertise, I also have the quite new ones (to me) of speaking to a non-academic audience in their second or third language on a topic they're far more likely to be plugged-in on than little ol' me.

The bottom line is, I have to find a way to make this talk fun for me and interesting to them. Impersonating a political scientist, much less a pundit, is out. So, what is to be done?

Fortunately, the JASF Secretary-General is a smart guy and he threw me a bone I am going to chew happily on for the first several minutes of the talk and in fact use to structure the whole shebang. 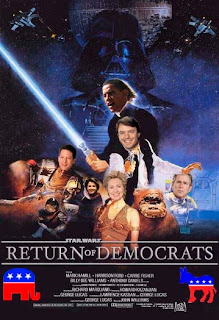 This gem will be featured in the invitation to the lecture going out to all JASF members, so everyone who attends will have seen it. "Reading" it will allow me to steer the lecture to areas I actually do have some expertise on and real interest in talking about: the analysis of visual images and narratives; the politics of science fiction and film; debates over the "imperial presidency" and narratives of American imperialism from manifest destiny to the American Century; the history of the U.S. in Asia and significant changes since the 1970s. It's not like I'm going to save all the "inside politics" stuff for the Q&A, but I'm going to try to frame it in a way that makes it palatable to me and hopefully informative and provocative for my audience. The real title that I'm working from is "The End of the American Century in Asia," but "Return of the Democrats" is what it'll be known as in Fukuoka.

So I'll close with a bleg: What are your responses to this image? How do you read it? How would you link it to U.S. foreign policy in East Asia? What should I be reading in the next month to prepare for the Q&A? (I just found out it's been extended to a 2-hour session, so I might have to be ready for over an hour's worth of questions, although that's really less than half an hour, given the need for on-the-fly translation.)

No, I'll close with an apology instead: sorry to be accosting you with this but I can't get to writing about Japanese kids' anime, American Dreamz, and Miyazaki until I finish my grading. Looking forward to fun posts from the Mostly Harmless crew while I'm out!
Posted by The Constructivist at 1:44 PM

One of my favorite Simpsons bits of all time is this
Star Wars parody:

YouTube didn't like your link, but this one is every department meeting you ever wanted to avoid in 3 minutes! Same or different than yours, Oaktown Girl?

Ah, YouTube didn't like the invisible space I added to the end of your link when I copied it. Having erased it, I see we found the same one after all. A foreshadowing of a convergence on our opinions of golf?

Hmmmmm . . . This is a tough one. I suppose what you're looking for is something that's obvious to an American with no particular expertise in politics, but a certain amount of sophistication about culture and such things, and not obvious to a Japanese who might, however, be very knowledgeable about American foreign policy, etc.

Provisionally, I think the image is fine. There's enough going on that you can go anywhere from it.

People's intuitions about things start locally. If the nature of political parties is different in Japan than it is in America, then your Japanese audience may well be building their knowledge on mistaken hidden assumptions. What would they be and what are the consequences?

And now I free associate. What's the significance of the fact that Clint "Dirty Harry" Eastwood has just made two movies about Iwo Jima, one from an American POV, and one from a Japanese POV (and based on Japanese texts)? This sort of thing seems almost unprecedented in film history.

Do you know about Mayors for Peace? It's an international organization of mayors who want to eliminate nuclear weapons by 2020. It was started by the mayors of Hiroshima and Nagasaki. What's this about city governments meddling in foreign policy? Would Democrats in power be more favorable to this sort of thing than Repubs? This organization has a website, which lists the cities that belong.

And, on general principle, you ought to look at Eiko Ikegami, Bonds of Civility: Aesthetic Networks and the Political Origins of Japanese Culture. It's the most interesting book I read last year. Given your interests, etc. I figure this book would interest you. And it might even suggest a hook or two for your talk.

Hi, C. Thanks for inviting me to join you blog.

Equating Democrats with that ramshackle valorous crew of heroes from Star Wars is amusing in an ironic sort of way, I suppose. Who wouldn't like to believe that present circumstances have thrown together a disparate bunch of characters who, acting together, somehow manage to overturn the dire hegemony enforced by the likes of Darth Cheney? (We have to suppose he's the one behind the mask, don't we?)

Hoping for Democrats (Democrats!) to take on that role, to act valorously, heroically, is like hoping they behave like Han Solo, whose protective cloak of seeming cynicism is gradually shed to reveal his incorrigible and natural goodness. Of course, by B movie conventions, Han Solo is (you'll excuse the expression) always already going to turn out to be the good guy. I've long since tempered my optimism about Democrats in this regard. Still, it's a fun idea.

But I think it hints at something I'm sure you've already noticed: there's almost no place for the rest of the world in America's myth of itself. It's always all about America. Here in the poster the whole galaxyspanning Star Wars empire is equal to America, and those cast as valiantly resisting it are all Americans, too.

So I think there's an opening for you to discuss how difficult it is for discourse in America about East Asia not to bend back toward the gravity well of its own self-regard, something your audience probably has plenty of experience with.

A very fast thank you to the MH crew for brilliant suggestions and comments--this is why you all are so much fun to play with. Do you think I'd lose all credibility with my audience if I showed about a minute from Oaktown Girl's Simpsons clip to help bring out the multiple ironies of the poster?

I think people in Japan must be as disappointed in the last 3 "Star Wars" as Americans are, so they'd probably love it.

For "Simpsons" clips, make sure to go to the YouTube Simpsons specialist named "Gorlap". He's always got the best quality Simpsons video as far as I can tell.

"Gorlap" has a lot of subscribers for his YouTube clips, and he recently sent out a message saying someone was trying to steal his YouTube identity. Be sure you find the original "Gorlap".