It's spring in Japan! The Constructivist household is heading off on a cherry blossom bus tour later this morning and the Mostly Harmless crew has an explosive announcement to make upon our return. [Update: the tour was cancelled and we couldn't wait!] Now, though, here are some spring-like things for you all to look at, listen to, read, and hopefully enjoy.... 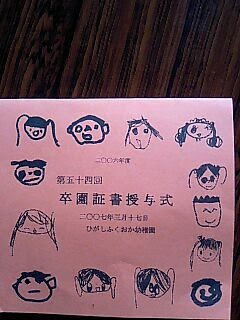 Yes, they have a graduation ceremony for the pre-school kids who will be entering the official school system in April--and these are their self-portraits. Sugoi kawaii deshita! Or rather, as the Hakata kids would put it, cho kawaii!

Tsuma and I scoured the YouTubes for two Japanese kids' tv song-and-dance numbers in particular, but apparently NHK does a good job of protecting its copyrights, so you'll have to click here, then click on the right (musical) button and then click the blue (musical) button to listen to one of them, "biolantan." I guarantee you won't be able to get it out of your head, even if, as it turns out, the lead singer who composed it (and the even better one you can only buy right now) admitted the lyrics are pure nonsense. I'll take that over the impure nonsense oozing from the White House any day.

Speaking of which, General J.C. Christian just opened the unofficial campaign HQ of Disco Rudy over at Second Life. And AltJapan gets into the spirit of Celebrity Death Match via google trends. Sounds like he's been reading a certain Arbitrary But Fun Friday at a certain ex-Blogue, whose auteur apparently has blog scratch fever. Gotta love the spring!

One last thing: English-subtitled versions of Legend of the Galactic Heroes on teh YouTubes get scanty after the first 9 episodes, but you can brush up on your Japanese by working your way backwards from here and supplementing it with this. Maybe Adult Swim will get March Madness and make a deal to get all 110 episodes translated and aired by 2010!

[Note: Mostly Harmless will be hosting the Blogocalypse Carnival on April Fool's Day 2007. Start your keyboards and send your links to the[underscore]constructivist18[at]yahoo[dot]com no later than the morning of Saturday, March 31. Anything that combines bloggy with apocalypsy matters will at least be considered.]
Posted by The Constructivist at 11:03 AM